CYBERJAYA, MALAYSIA (10/10/2008) – Srimen Gajen and Raju also got caught up with the “Damodara fever”. They worked together as a team to organize Damodara prayers at Multimedia University (MMU) and invited Bhakta Hemalan, Navin Raja and Prajindra from Tenaga Nasional University (UNITEN) to help out. As they were informing their friends about the prayers, one of their friends, Thiben, voluntarily offered to host a program at his apartment.

Approximately, 15 students attended the Damodara program at his apartment. Bhakta Hemalan addressed the crowd and gave brief description about the glories of Damodara month and narrated Lord Damodara’s pastimes. Soon after, all the students were given opportunity to offer ghee lamps while bhajans were sung simultaneously. As the program was about to come to an end, upon request, the bhajan suddenly burst into a heavy kirtan inducing most of them to dance. After the program ended, the Vedic Oasis for Inspiration Culture and Education (V.O.I.C.E) team continued to invade the hostel areas in search of more students to take part in this wonderful prayer. At the end of the day, around 43 students offered ghee lamp to Lord Damodara.

KAJANG, SELANGOR (15/10/2008) – The second wave of Damodara Caroling at Tenaga Nasional University (UNITEN) took off at 9.00 p.m., with Bhakta Surintan and Bhakta Hemalan going from room to room at on-campus apartments to allow students to offer ghee lamps to Lord Damodara. A total of 41 students offered ghee lamp, including a Chinese student during the two and a half hour program.

Mini altar-calendar, pamphlets of Damodara-lila and candies were given to those who offered ghee lamps to Lord Damodara. Many were amazed that the whole process cost nothing, and thankful for the effort undertaken to perform this service. One student even offered to donate some money, but was kindly declined as offering ghee lamp to Lord Damodara was the only agenda for the day. The devotees also publicized about the upcoming grand launch of Deepavali Damodara at KL Sentral on Friday, 17th October 2008. The students were also briefed on actvities at Sri Jagannatha Mandir, Iskcon Kuala Lumpur and as well as on the “Vedic Oasis for Inspiration Culture and Education” (V.O.I.C.E).

During the room visit, one devotee from Teluk Intan and a student who attends programs at Brickfields Namahatta were discovered. Not only students were able to offer their prayers to Lord Damodara but our contacts list began to grow. Damodara Caroling is becoming more known in the academic populous. We hope we will be able to capture more students from other colleges and varsitiesl to offer the ghee lamps during this holy month.

SERDANG, MALAYSIA (16/10/2008) – History was created on today at 7.45p.m. when Lord Damodara made its grand entry to Putra University Malaysia (UPM). The Lord’s sweet form definitely captivated many hearts of young students in the Engineering College of UPM. Bhakta Hemalan, Bhakta Navin and Bhakta Harish managed to get 30 students to offer ghee lamps to the merciful Lord Damodara.

Among the 30, there were 11 Chinese students who participated in this joyous festival. An amazing start!! Positive response was received from members of the public. Some were asking us to have some bhajans while others were inquisitive and amazed about the Lord’s form and His pastimes. Students who offered ghee lamps to Lord Damodara received prasadam, mini-altar and pamphlet on the Damodara festival. The target will be to make this event bigger next year with the hope that everyone will receive Lord Damodara’s mercy. 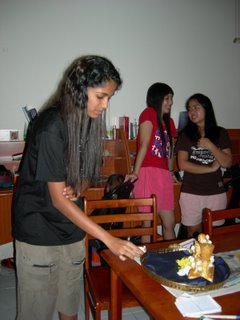 KAJANG, MALAYSIA (23/10/2008) – It was a blissful day. ‘VOICE Girls’ division did Damodara Caroling with a bang in girls hotel in Masterskill College located at Garden Park Condo in Bandar Sungai Long, Kajang. It was a rainy day and was still drizzling but unfazed by material problems, our determined team of mataji preachers assembled at Garden Park Condo just before 7:00 p.m. headed by HG Astasakhi Bhakti dd and supported by Bhaktin Jayanthi and Sushri Bawani.

The trio then started visiting apartment allocated to students. Around 200 girls offered ghee lamp to our sweet Lord Damodara, including Chinese, Sarawakian, Sabahan students, besides the Indian students. Though Muslim students did not offer ghee lamp but they were attentively hearing the pastimes of Lord Damodara. A few students thanked the team profusely for bringing Lord Damodara to their house and blessing them.

Watch us in action here

On the way to students’ apartments, the team also visited 6 families and around 10 people offered ghee lamps. These families also got to know real meaning and importance of celebrating Deepavali. All three matajis were unstoppable and so enthusiastic but had to stop the caroling as it was almost midnight and had their morning duties to attend to.