PETALING JAYA: The recent melamine-in-milk scare has caused another round of panic among consumers, who worry that using melamine made utensils would poison their food.

While experts have said there should be no cause for undue concern, consumer officials advised the people to stop using plastics to wrap food.

Consumers Association of Penang (CAP) adviser Dr T. Jayabalan, who is a member of the National Poison Centre, said melamine ware such as plates and ladles were safe for use, “and would not result in death.”

“Even if the melamine utensils leach residue due to extremely high temperatures, it is in a very tiny quantity,” added Dr Jayabalan, who likened this amount to a cube of sugar in a lake.

Melamine is used to make plastic kitchen utensils and plates which are similar in appearance to porcelain.

It is a thermosetting plastic which does not modify in form until exposed to a temperature of above 200°C.

“When exposed to high heat from food, the plastic could leach and release chemicals which may disrupt the human reproductive system and affect hormone production,” he said.

“We may not be able to see the effects immediately, but our children will be at risk of mutation and even sex changes,” added Dr Jayabalan, who is also a National Poison Centre member. END_OF_DOCUMENT_TOKEN_TO_BE_REPLACED

It was not an accident when Caitanya Mahaprabhu spoke the following words.(Siksastaka Verse 2)

O my Lord, Your holy name alone can render all benediction to living beings, and thus You have hundreds and millions of names like Krishna and Govinda. In these transcendental names You have invested all Your transcendental energies. There are not even hard and fast rules for chanting these names. O my Lord, out of kindness You enable us to easily approach You by chanting Your holy names, but I am so unfortunate that I have no attraction for them. END_OF_DOCUMENT_TOKEN_TO_BE_REPLACED

KUALA LUMPUR – The following milk and dairy products are placed under the Govern­ment’s list of items suspected of having melamine. The list of suspected dairy products consisted of items that the Health Ministry had sealed during enforcement operations.

According to the Health Ministry, those items will be taken and tested. If it is given the all-clear, it will then be allowed back into the market. 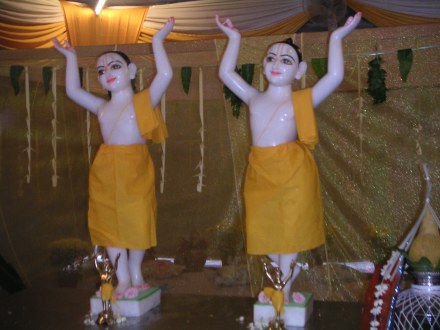 BY JEYANTHY PILLAI
The trip to Seberang Jaya (Butterworth), Penang on the 17th and 18th September was worth every moment. My husband drove our children and I there. We reached at about 2pm. A very large canopy with a special stage was set for the installation. The deities were kept in a separate area beside the main canopy area. Many matajis were preparing the flower garlands in the main temple area. The flowers were simply lovely; The matajis were really expert in tying the garlands and making the bouquets. The flower garlands reminded me of the ones that was used in the Chowpatty temple during Gaura Purnima this year. Others were busy drawing the rangoli patterns for the fire sacrifice. Dozens of beautifully decorated pots laid in the side of the main stage area. Prasadam was being prepared for devotees who were slowly trickling in for the festival.

END_OF_DOCUMENT_TOKEN_TO_BE_REPLACED 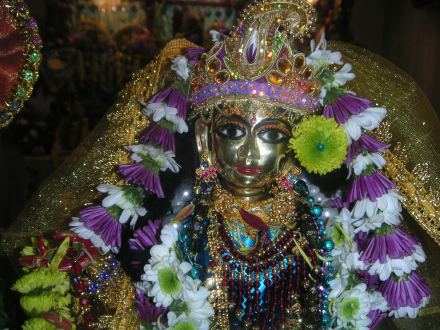 Someone once asked me why Iskcon temples have so many festivals and that got me thinking. If the festivals were not there, life would be so boring with us just working in our mundane day to day activities. There is so much to do and prepare when these festivals come by. You make full use of the skills you have for the Lord and you even discover you are able to do so much more than you ever thought possible. END_OF_DOCUMENT_TOKEN_TO_BE_REPLACED

SUBANG JAYA, MALAYSIA – My mum bought a beautiful Radharani doll in 2004 for my sister, Breenda. The last few days before Radhastami, Breenda was so excited that she started making necklaces and bracelets for her Radharani doll. My mum made it more special by making a lovely veil with roses, ribbons for her hair and bought a beautiful necklace and earrings for her. She really looked gorgeous. END_OF_DOCUMENT_TOKEN_TO_BE_REPLACED

One of the amazing cakes offered to Radharani this morning.

Radhastami to day, the appearance day of Srimati Radharani, Lord Krishna’s tender-hearted feminine counterpart and the greatest worshipper of God. Today is the eighth day of the bright fortnight in the month of Bhadra. END_OF_DOCUMENT_TOKEN_TO_BE_REPLACED

Dr. B.L. Sharma, a Vastu Architect and Consultant from Jaipur, India who generously offered free services, mentioned that the land purchased was “Godsent”. He said the land has good Vastu and instructed accordingly.

Coinciding with the auspicious “Holy Names Week”, when the whole world is hearing and chanting the Hare Krishna Maha Mantra,  Their Lordships, Sri Sri Nityananda Prabhu and Caitanya Mahaprabhu have chosen to make Their appearance in Malaysia at Bhaktivedanta Cultural Center (BCC) at Seberang Jaya, Penang.